Adding devices in an IoT platform isn’t the end of the process. Often, you might need to update them for new features or security upgrade. However, updating remote devices at times hinders their performance and causes disruption. For a hassle-free update of your firmware, we provide over the air (OTA) updates in our IoTConnect platform.

At first, you can develop a sample app which will help you to familiarize with IoTConnect DevLab. Gradually, you can improve your product by adding new features in your app using firmware and OTA updates.

How does OTA and firmware updates work in IoTConnect

Updating firmware is a relatively domain-independent operation that requires you to provide the version of the update and a file associated with it. The firmware version is associated with template that you need to create at a later stage.

Once you have released the firmware version, you can’t edit or delete it as it is already being used by the hardware associated with it.

The working of OTA updates

Let’s take an example of connected cars. When there is a new feature to be released on selected or all models of the connected car, with OTA updates, you can directly notify the users and send the update. This eliminates the need for users to visit their dealers for the updates.

A very known example of upgrading any app or OS on mobile phones simplifies the use of OTA updates. Users need not visit their respective mobile stores to get the OS update, instead the updates reach to them via notifications. 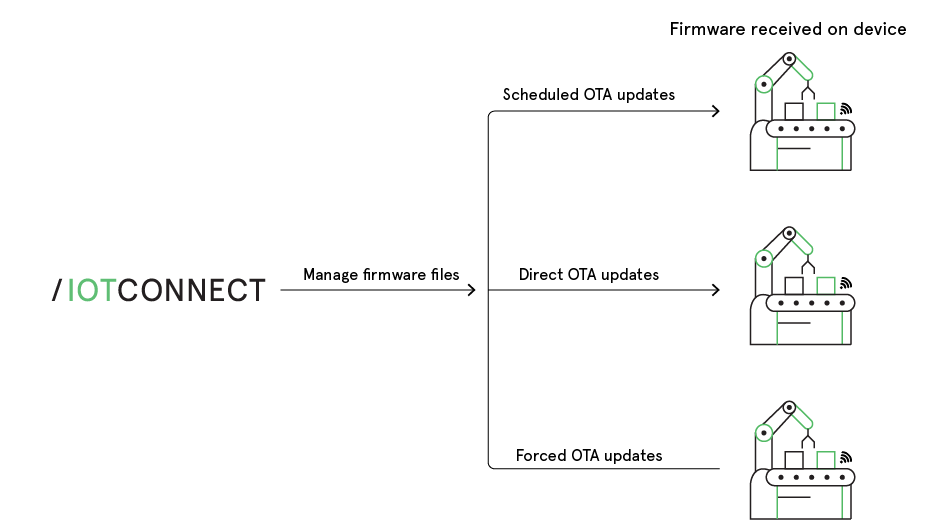 Is this page Helpful?